Ian W. Brown, Professor Emeritus at the University of Alabama and Emeritus Curator of Gulf Coast Archaeology at the Alabama Museum of Natural History, has written a book titled Behind Glass in Russia, 1992: An Archaeologist’s Journal! The book deals with his travel adventures in Russia while on a People to People archaeology delegation immediately following the collapse of the Soviet Union, the first to occur in that part of the world. 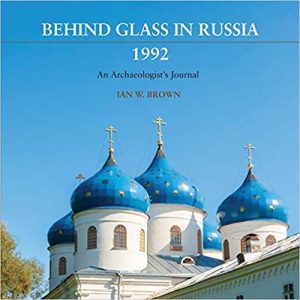 Dr. Brown specializes in the archaeology and history of Southeastern U.S. Indians and has spent over four decades excavating sites in Louisiana, Mississippi, and Alabama and writing about the role of salt in North America, England, and China. He has also written much on the subjects of gravestones and cemeteries.

Book Description: In September of 1992, less than a year after the collapse of the Soviet Union, an archaeological delegation sponsored by People to People International ventured into Russia. The author maintained a detail journal of their activities as they explored regions stretching from St. Petersburg to Novgorod and into the steppes and the Northern Caucasus Mountains. This was an important time of transition for Russia, when things were not quite what they were like under the previous Soviet regime and certainly not at all like what exists two decades into the new millennium.

You can purchase the book from Borgo Publishing: https://www.borgopublishing.com/ian-brown-books